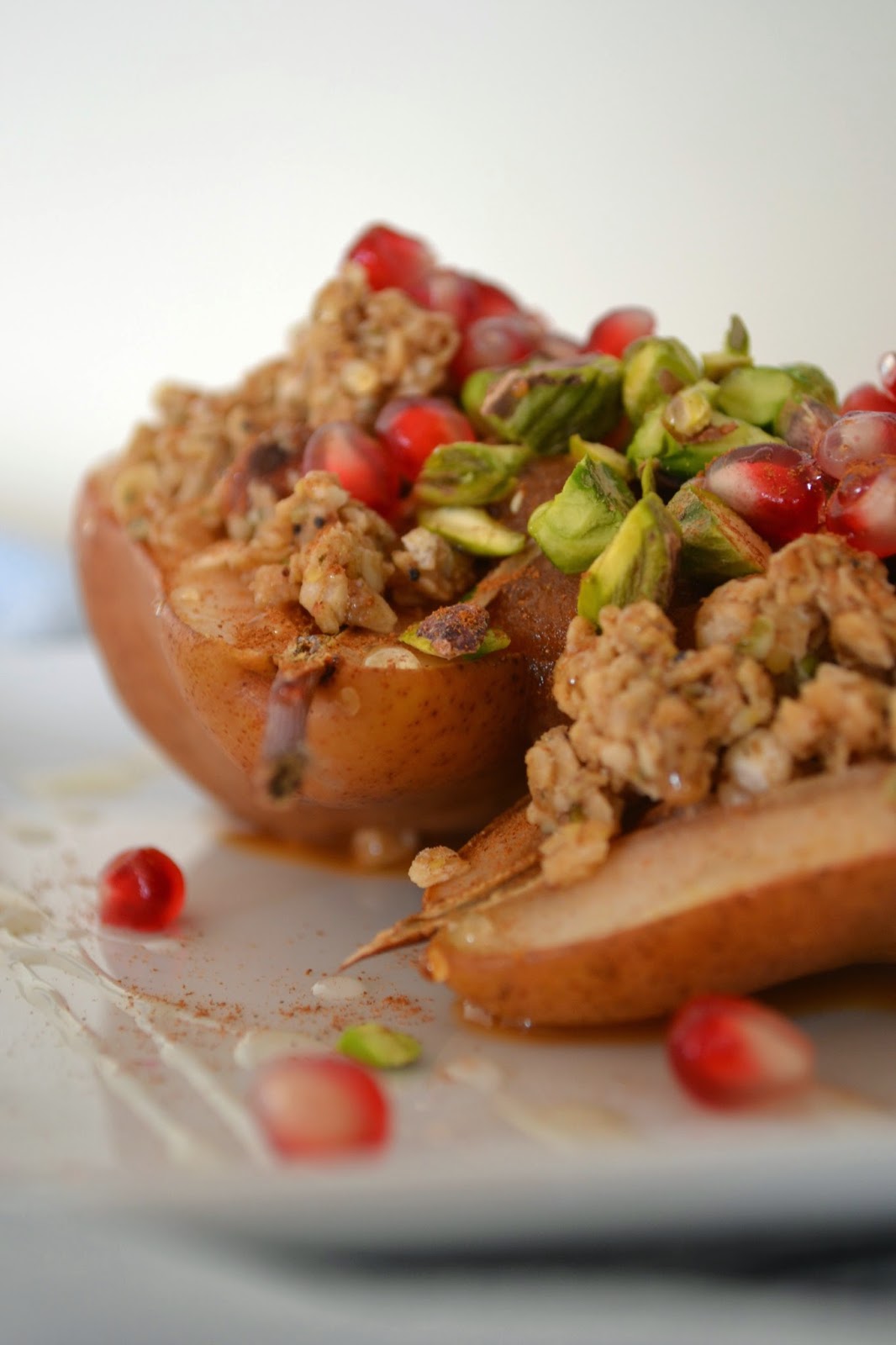 Lately I've been blog hunting like a mad woman. I've been so busy making other blogger's recipes that I was starting to wonder if I was ever going to be inspired to make my own. 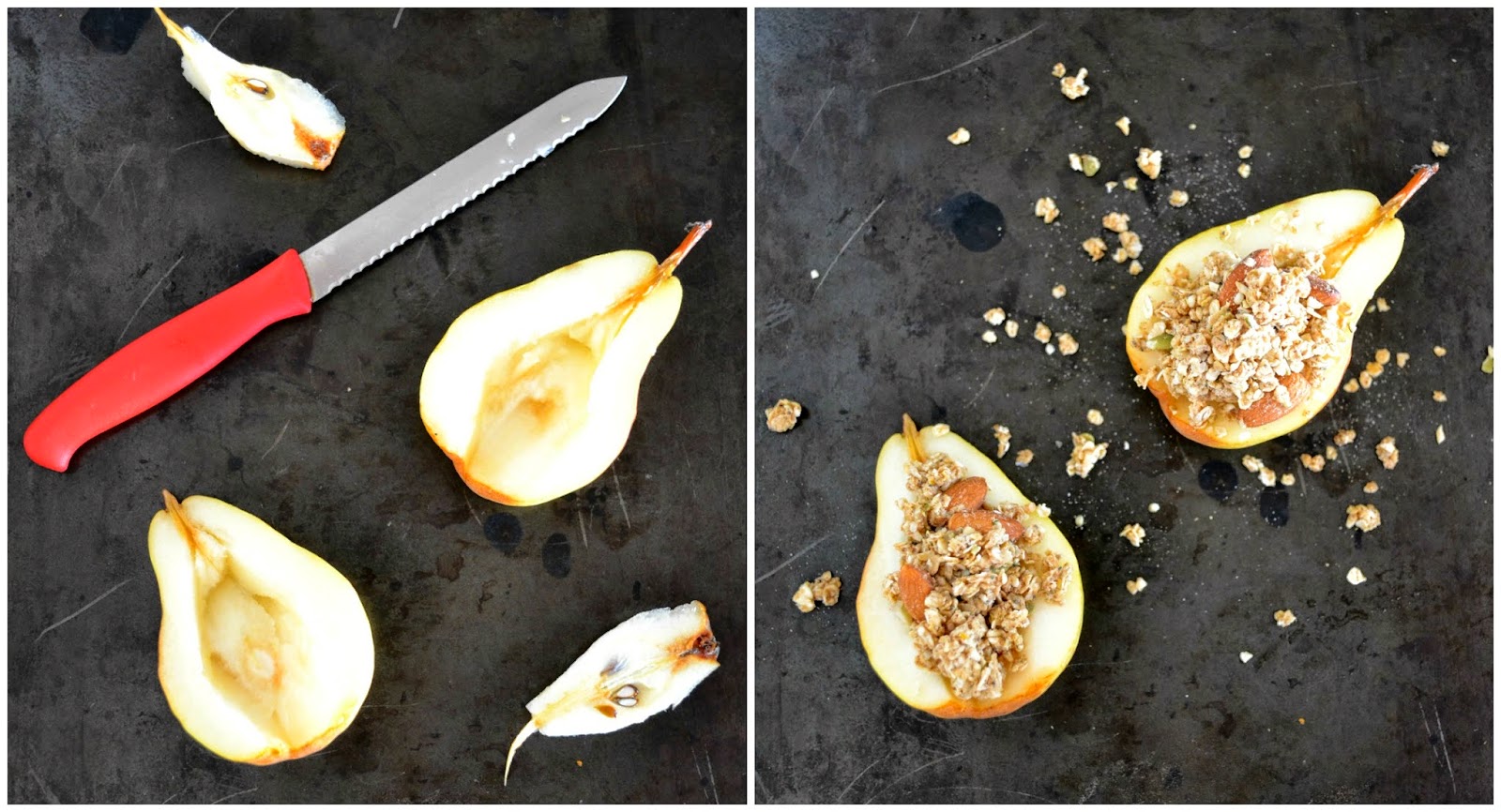 I was doing yoga this morning and suddenly became inspired to grab seasonal fruit and get to work. Kyri said "Pee in there!" so I grabbed her and I put her on the potty. She peed and we washed our hands and I walked into the kitchen. I grabbed a pear, a pomegranate and the home made apple sauce I just made from the apples my Oma gave to me last Sunday after church. 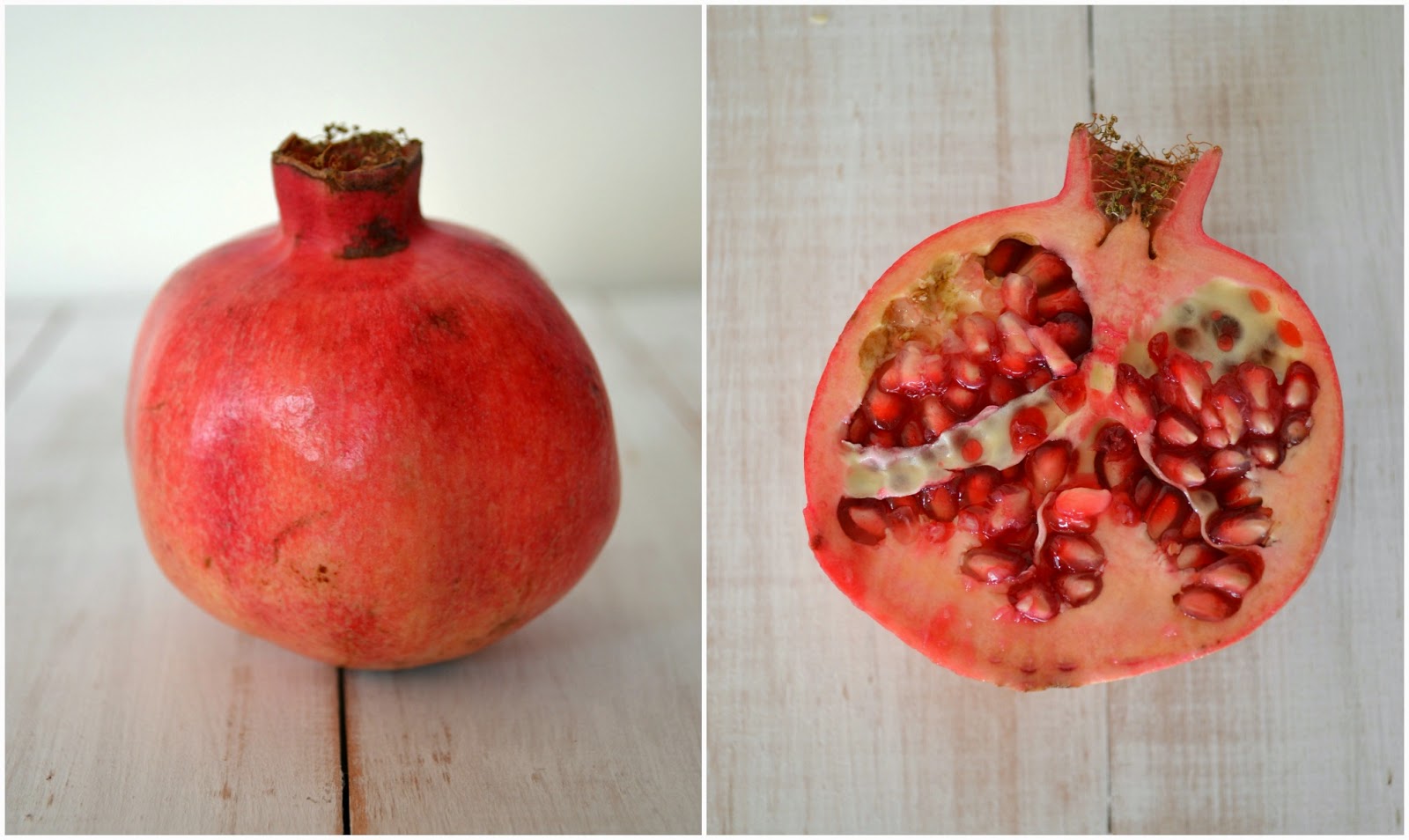 While I was chopping open the pomegranate I thought Woah! This is actually the first time I've bought a pomegranate and eaten it. Kinda trippy! I was really blown away by the fruit. It's so fascinating. It looks like lung cavities, or a heart. Then it reminded me of barnacles on rocks in the ocean. It was very time consuming, picking out all of those little red seeds, I noticed Kyri was eating them while I placed them into a little bowl. She loved them! (Seth ate the rest of them when he came home from school.) 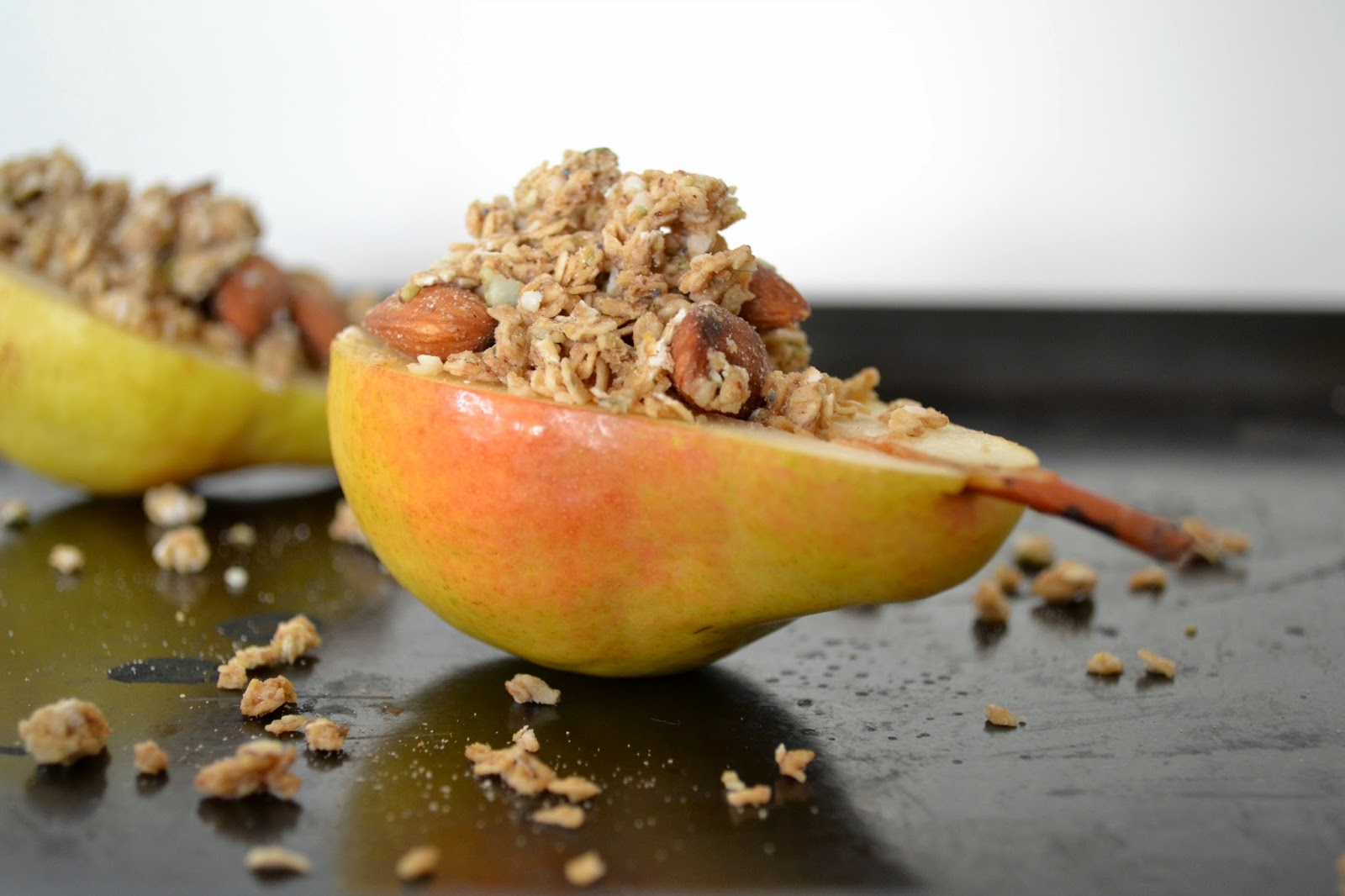 So since pears are in season, just going out actually, we have been eating lots of them! My Oma gave us pears, crab apples apples and more apples during this past couple months. I had a craving for a warm pear filled with my homemade granola so that's what I made. Then I topped it off with savory flavours. And let me tell you it was THE BOMB!
I shared some granola with Kyri to keep her busy. Trust me, it's hard being a photographer when there are baby hands up in your shot! Distraction is key. 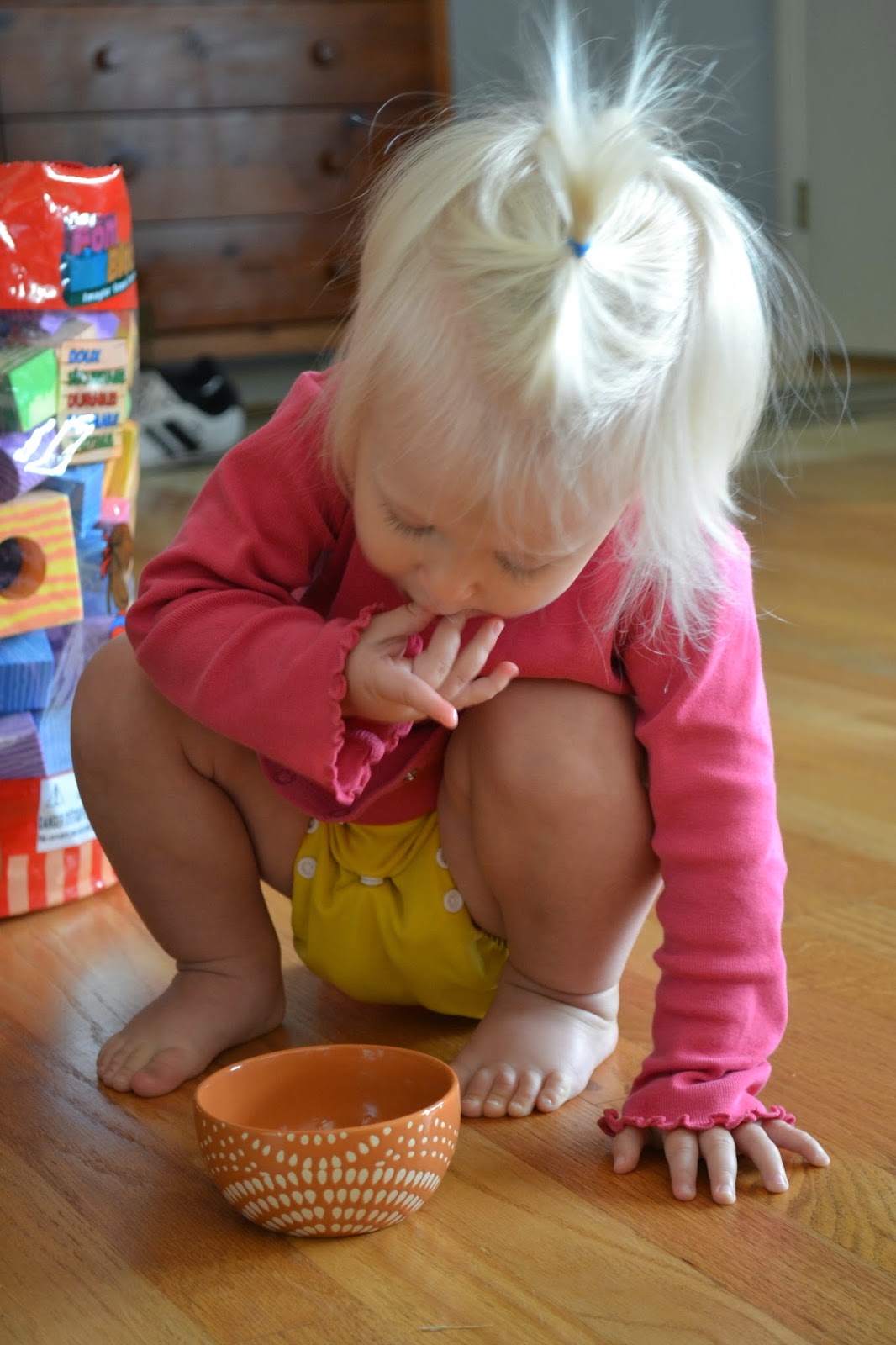 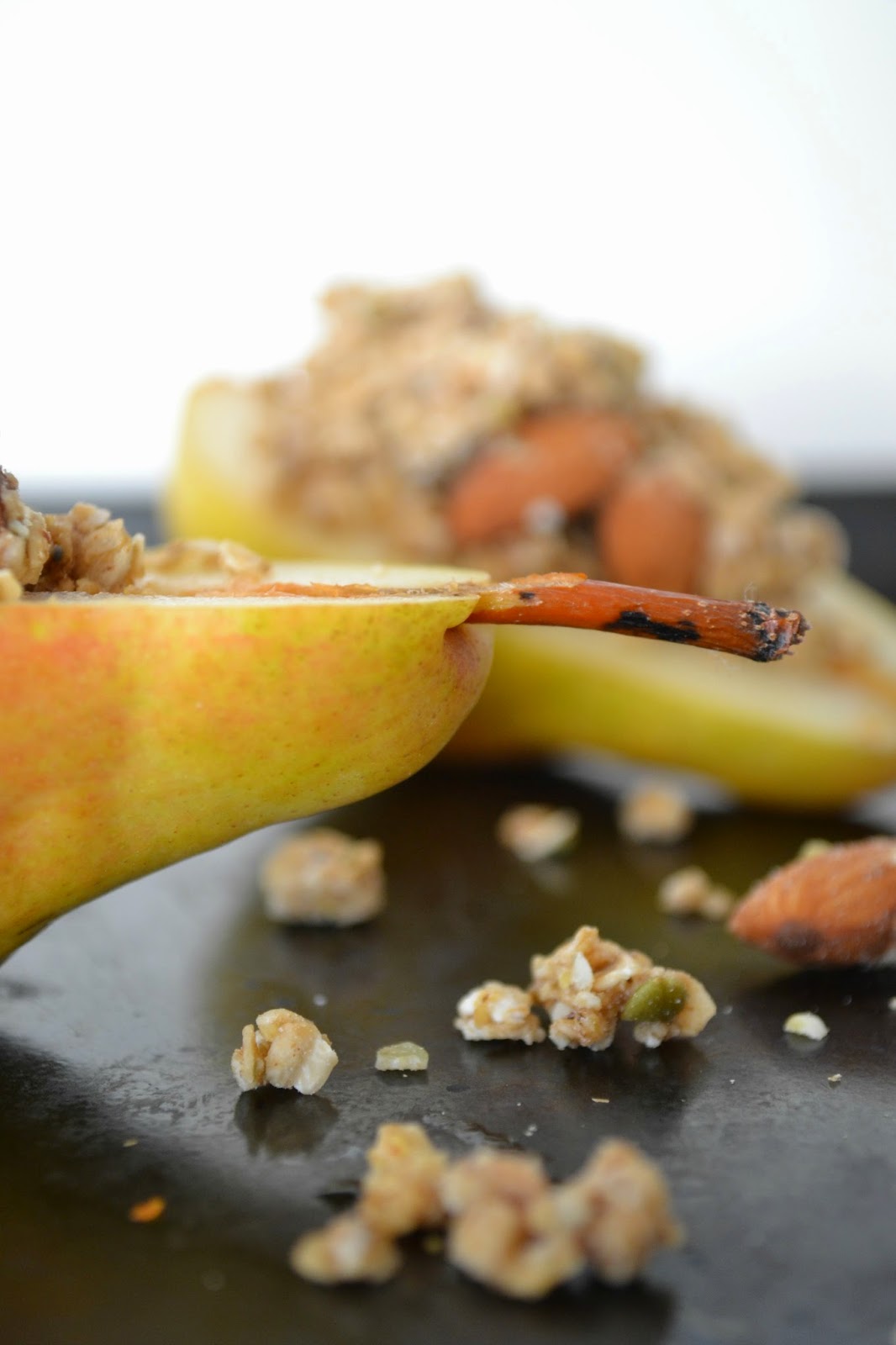 I baked the pear with the granola on top for 20 minutes. And then prepared the pomegranate and pistachios. 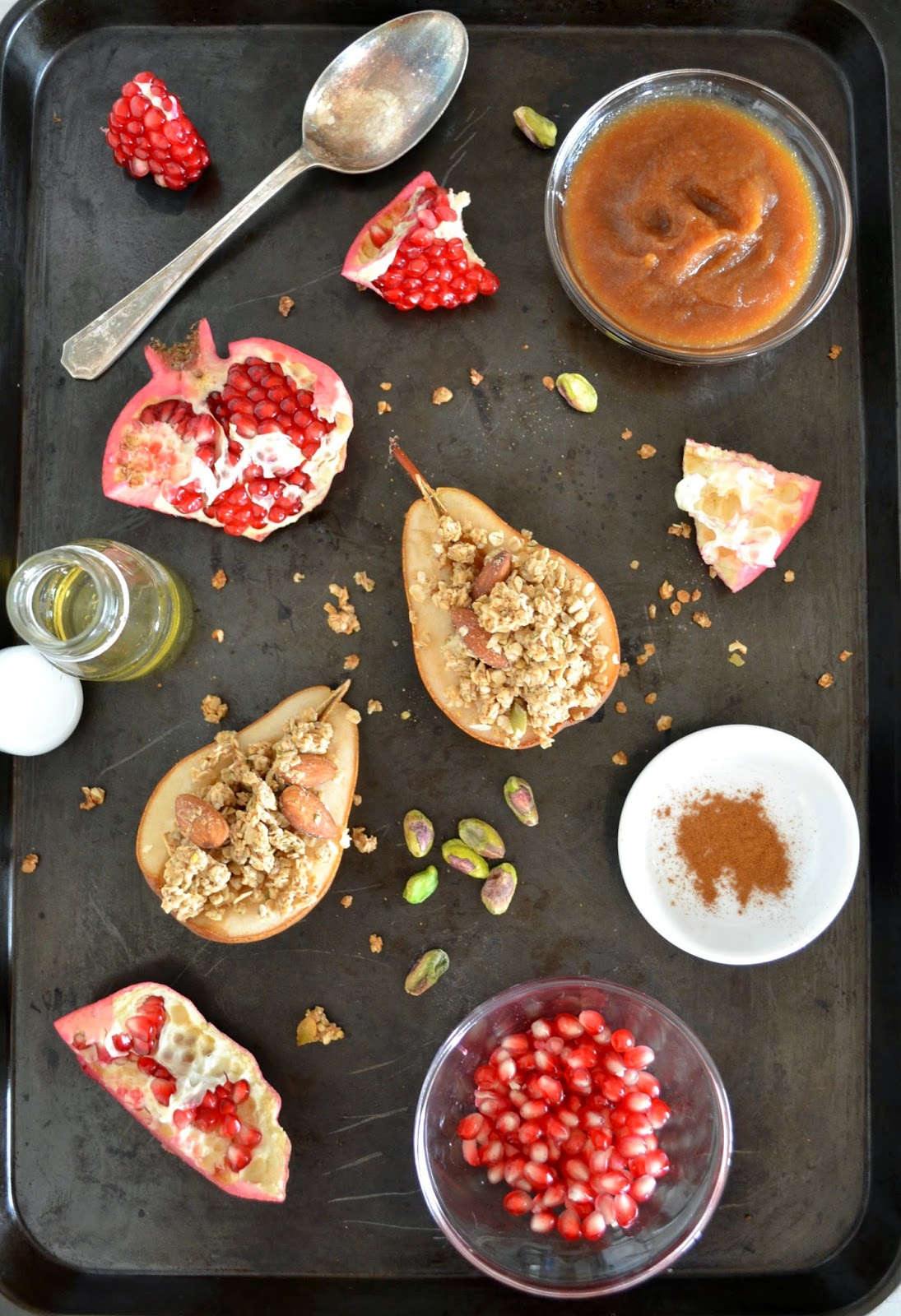 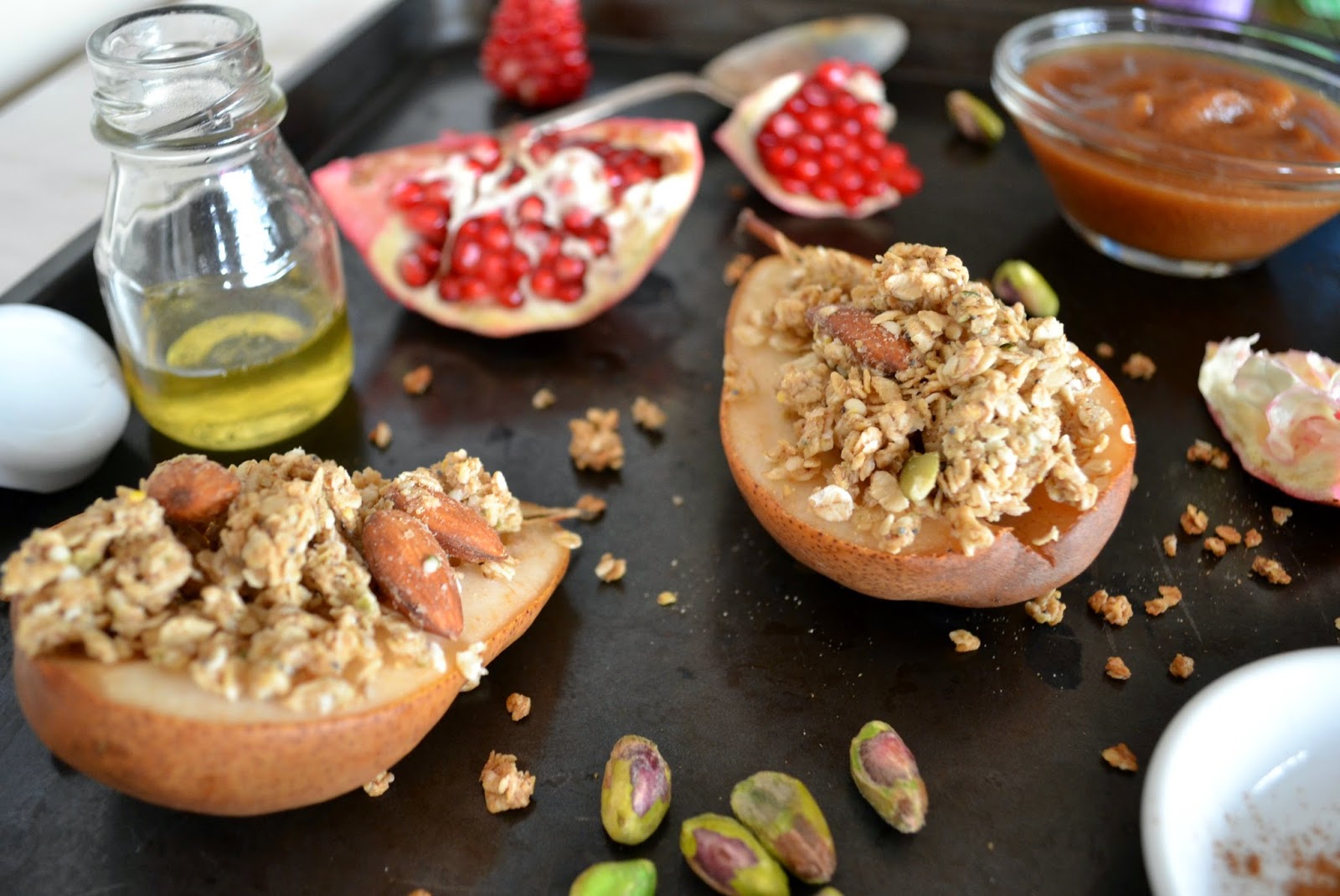 I topped it off with all these delicious foods you see here! Pistachios, pomegranate seeds, apple sauce and then I drizzled it with unpasteurized honey and a dash of cinnamon. And love was made. 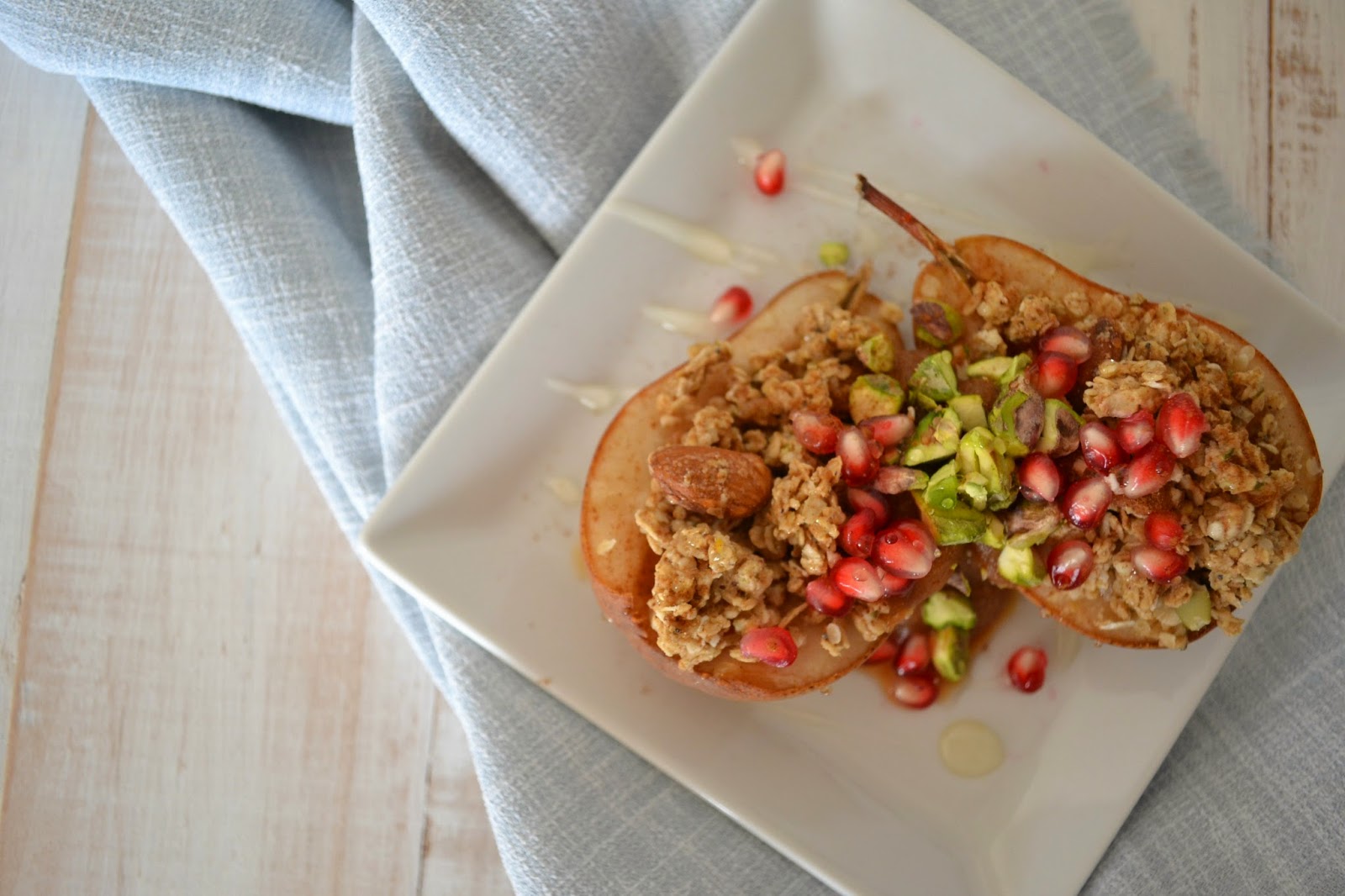 I shared with my cutesy. Kyri kept saying "More Pwease!" 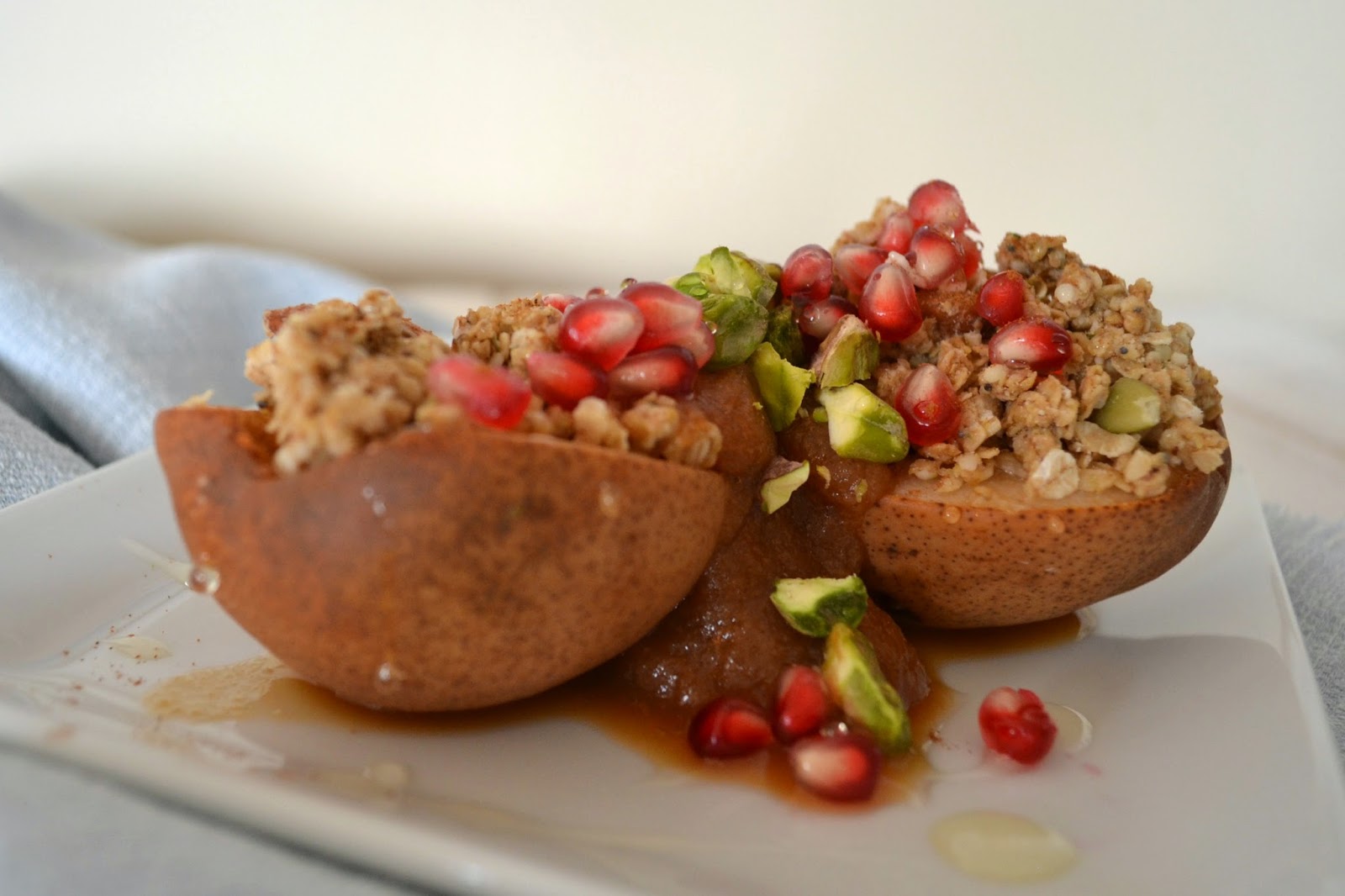 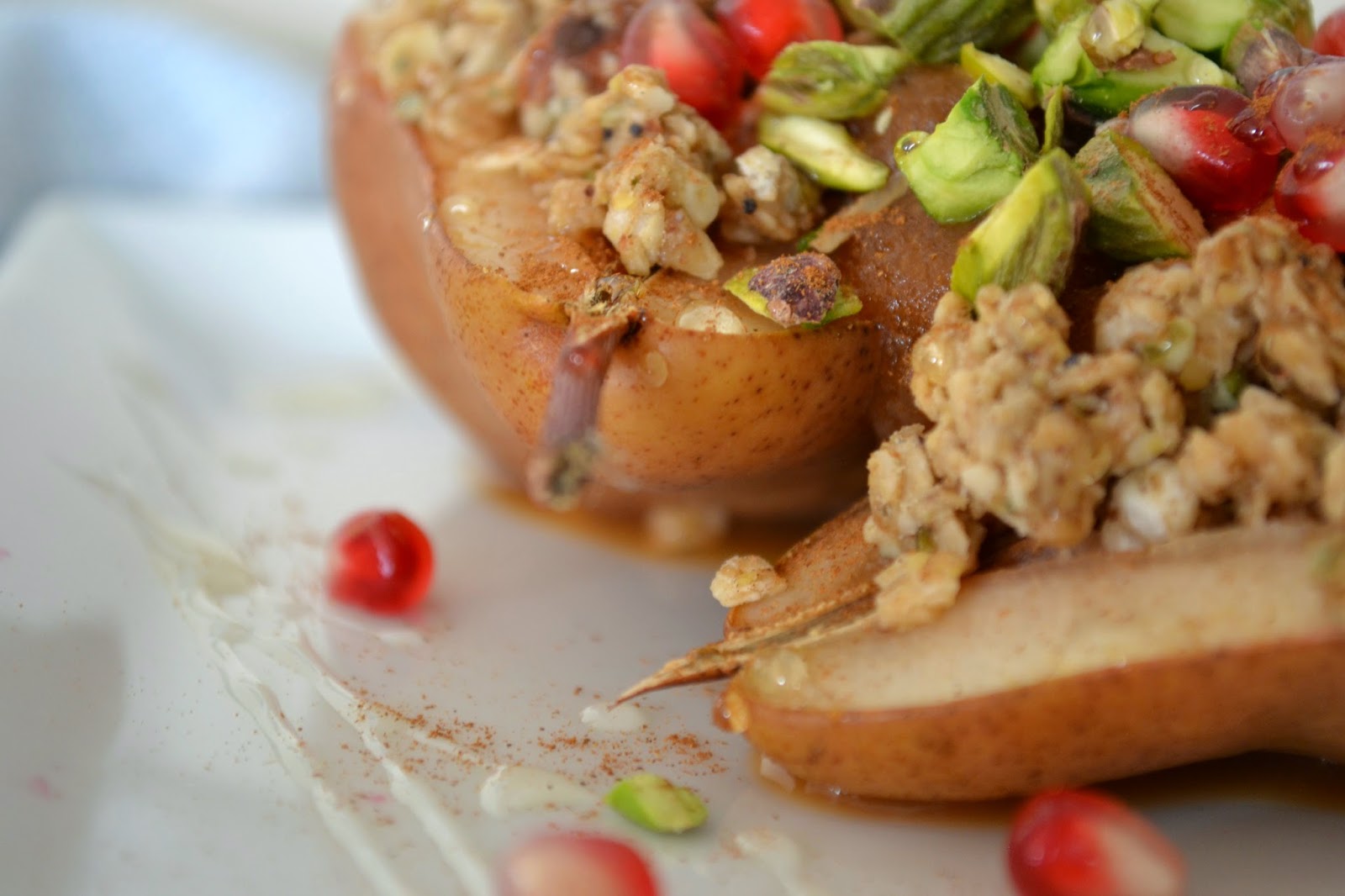 Mmm look at that raw honey dripping off the side of the warm pear. 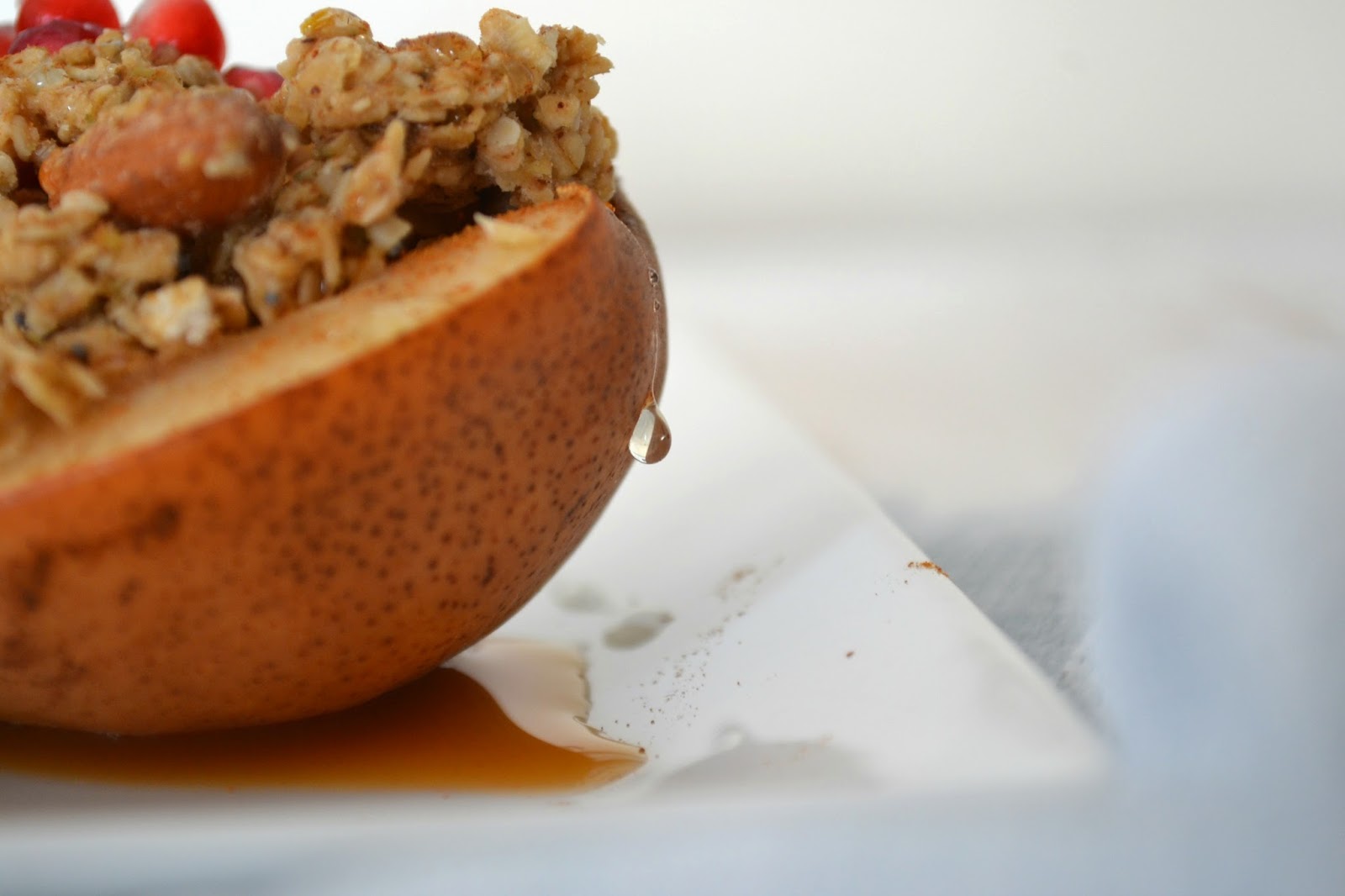 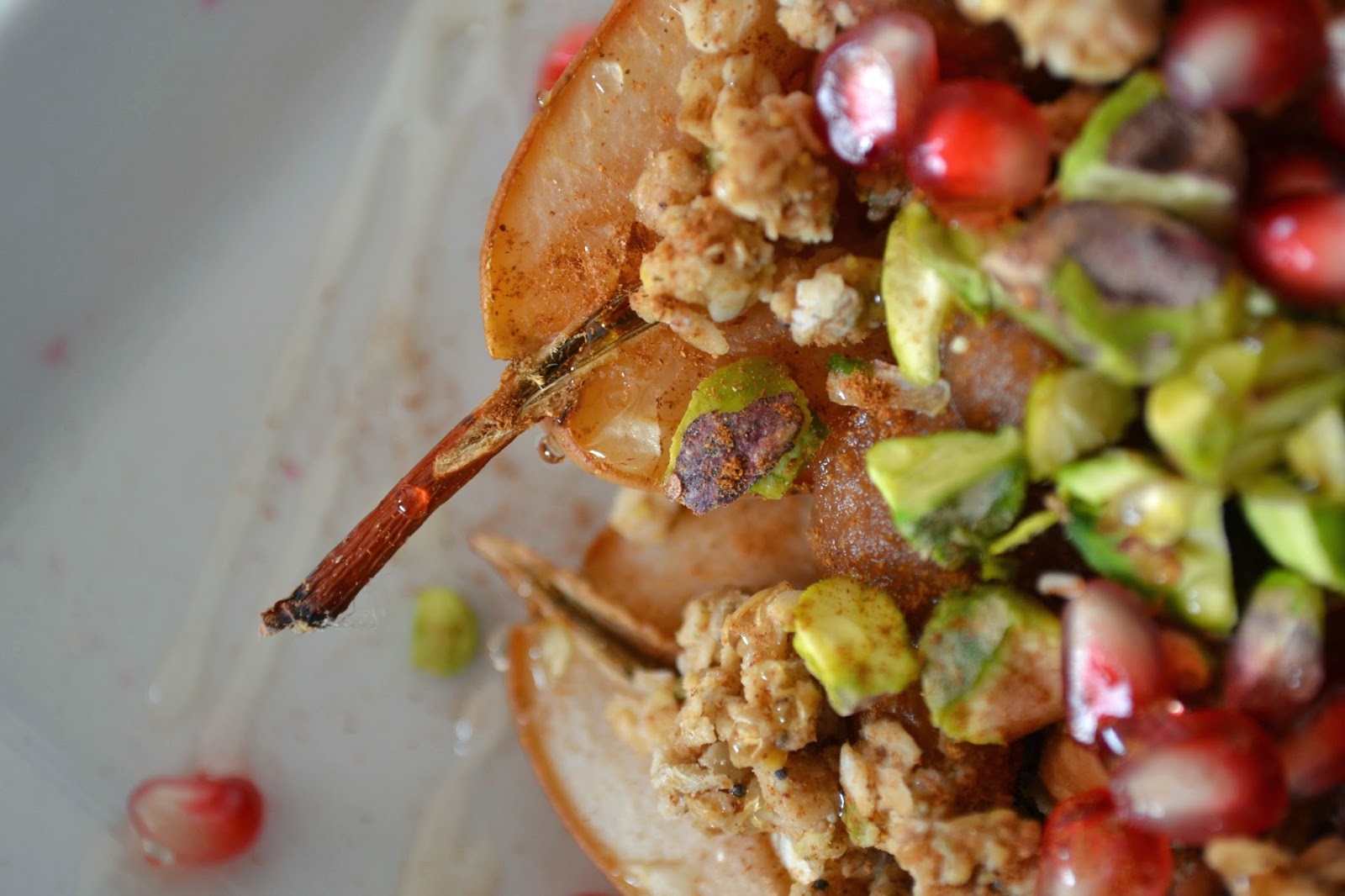 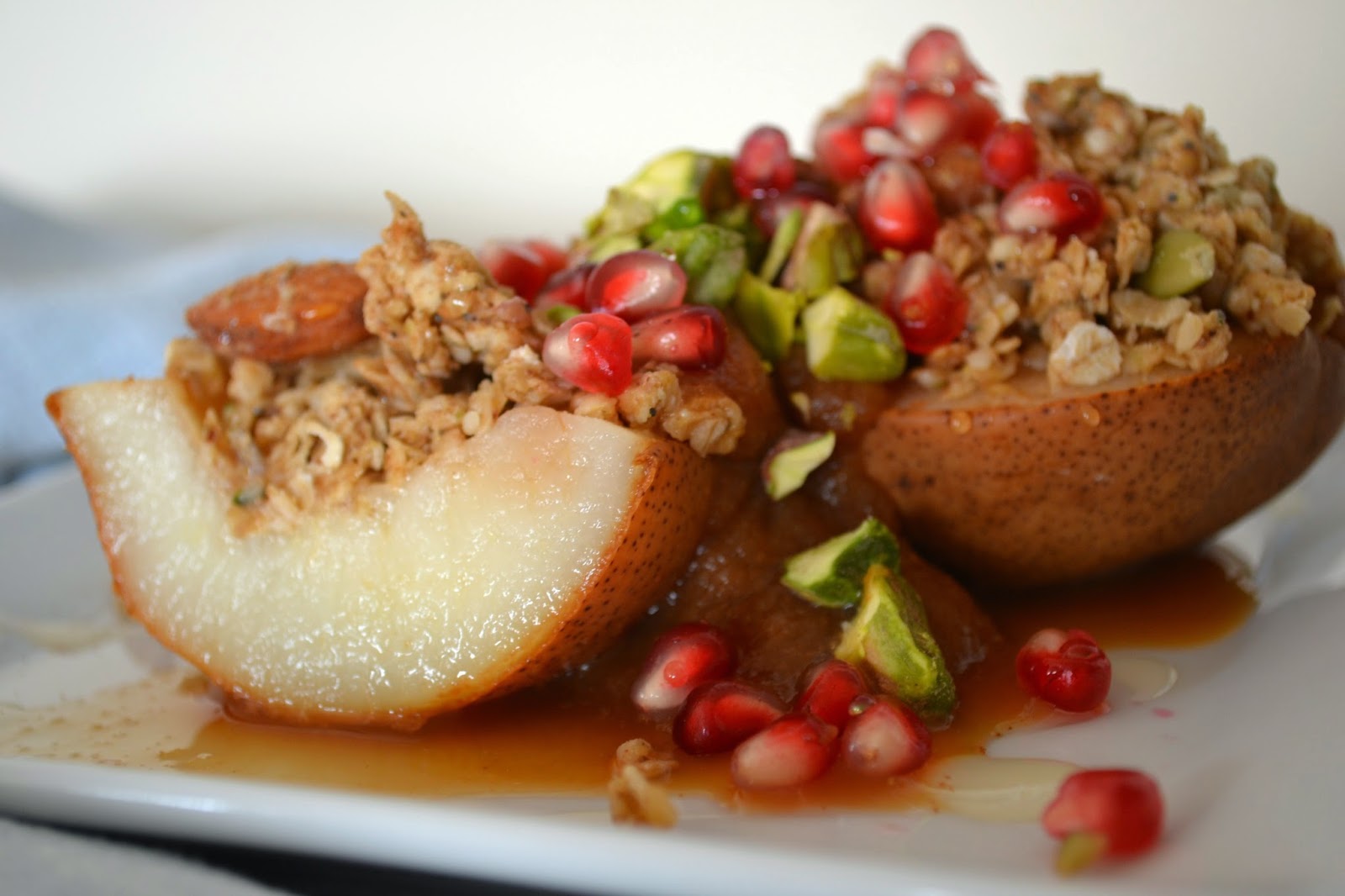 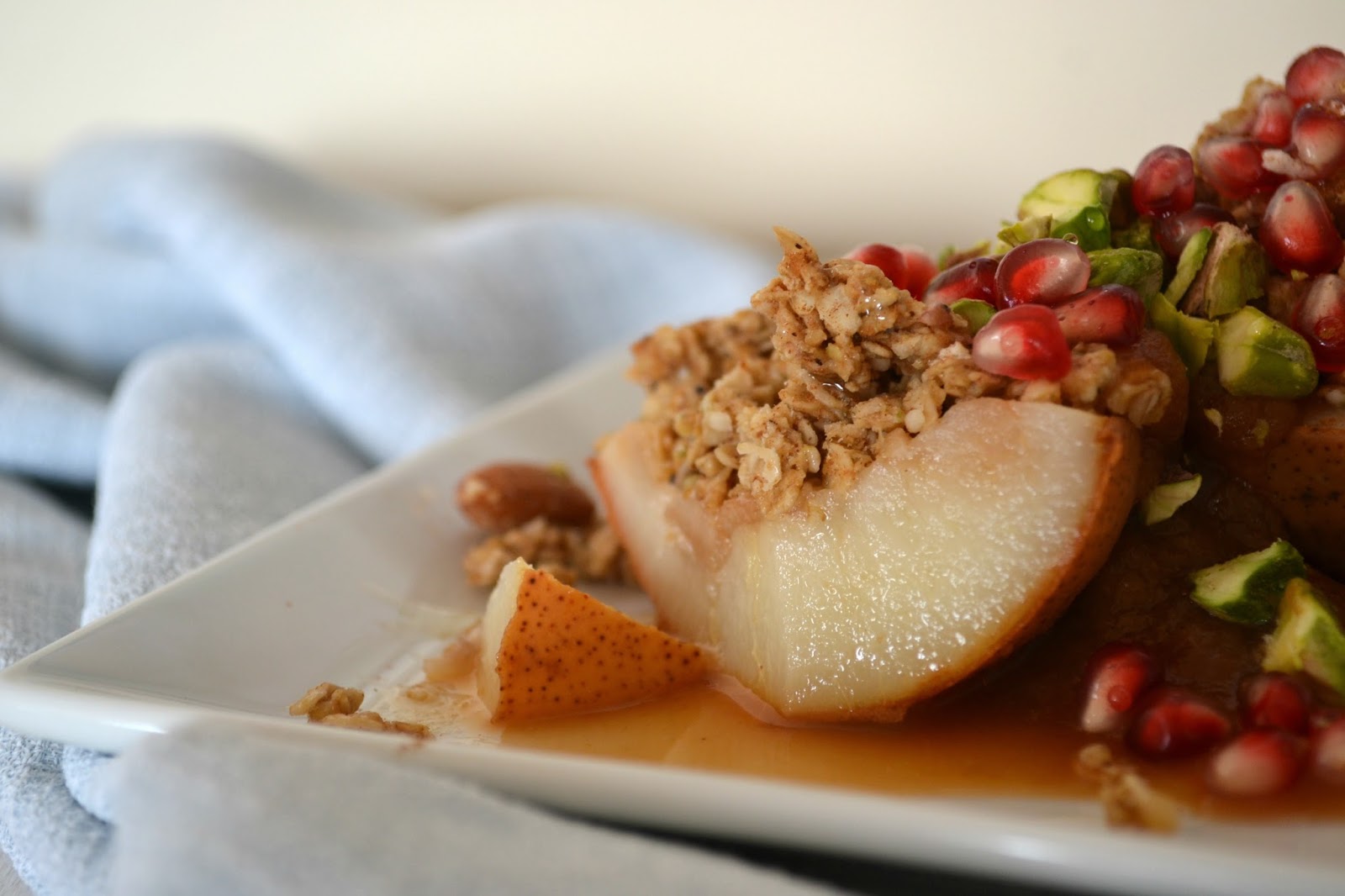 Until there was nothing left.... And then I realized I hadn't finished my work out. 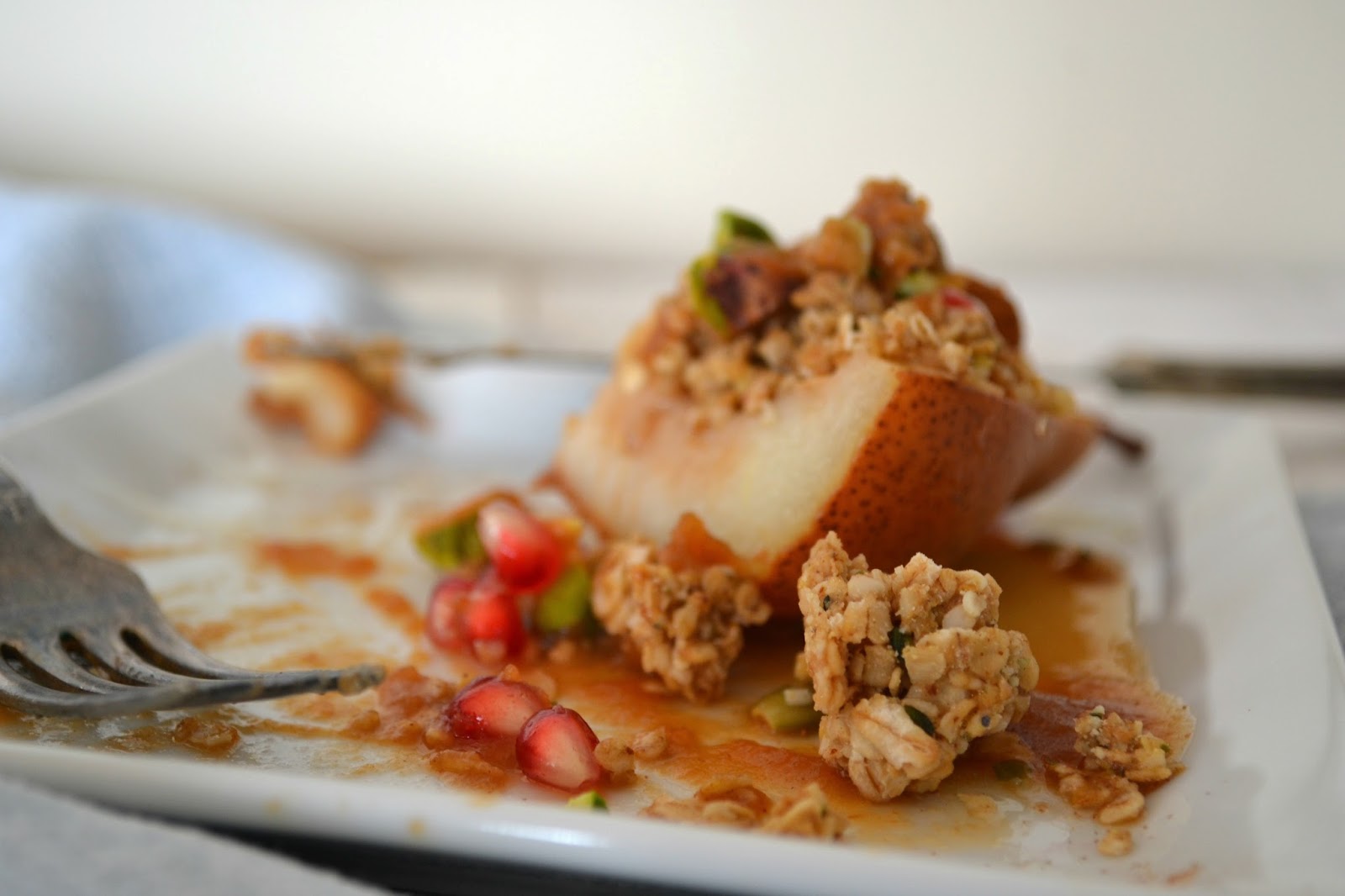 Pleasant Pear with Chopped Pistachio, Pomegranate, and Apple Sauce
This is my favourite brunch dish so far
Serves 1
1. Preheat the oven to 250° F (120° C). Cut the pear in half, from the top to the bottom. Use a knife and cut a U shape to cut out the core. Place pear on a cookie sheet.
2. Fill the U with maple granola and bake in the middle rack for 20 minutes or until warm and soft.
3. Take all the seeds out of the pomegranate and chop the pistachios.
4. Once pear is done top with apple sauce, pomegranate seeds, chopped pistachios, drizzle with raw honey and lightly sprinkle on cinnamon. Serve right away. Pleasant indeed. 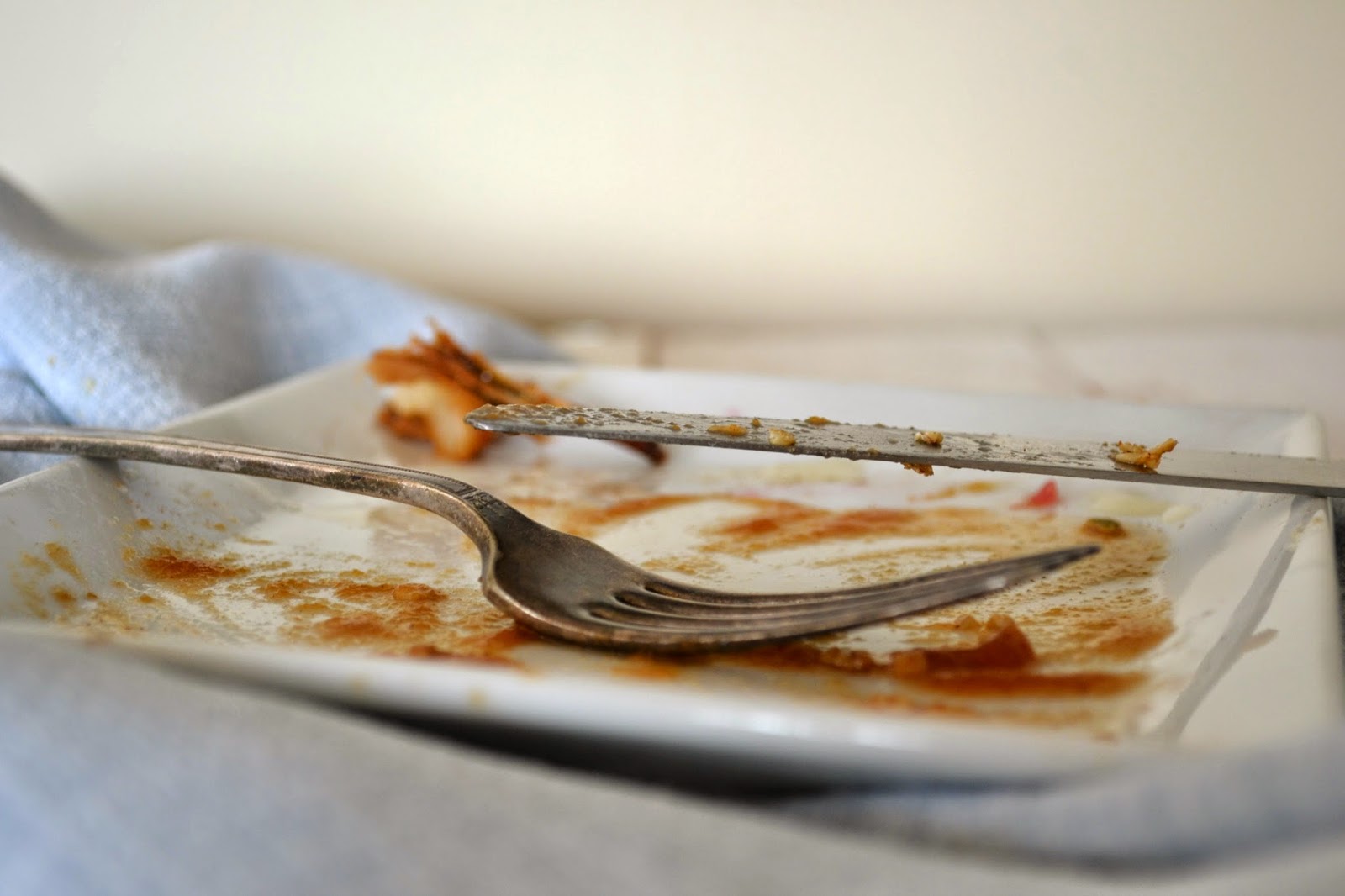